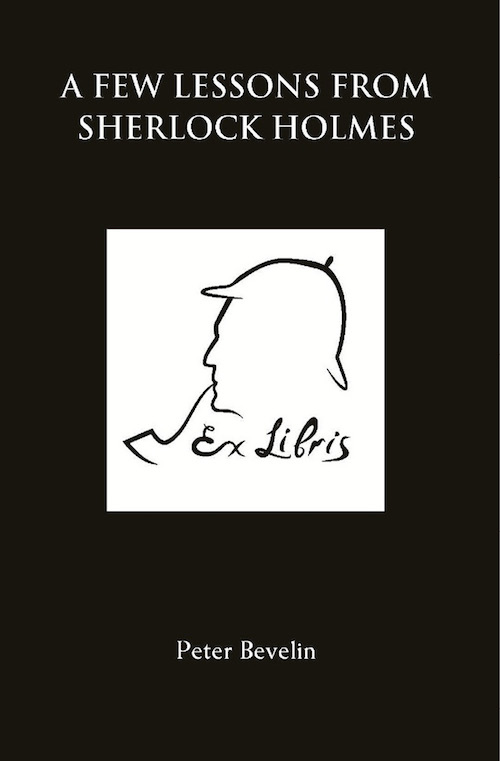 Tired of my daily humdrum, I decided to escape to Victorian London for a while, by reading all of my Sherlock Holmes.

This time though, I was going to make notes!

And then it dawned on me, that I already had a comprehensive set.
I had, along with my copy of Peter Bevelin’s fantastic Seeking Wisdom, also purchased a copy of his A Few Lessons from Sherlock Holmes.

Bevelin synthesizes not just Sir Doyle’s works, but also pulls related information from a wide variety of sources, like Joseph Bell who was Doyle’s inspiration for Sherlock Holmes and Edgar Allen Poe and Michel De Montaigne.

Before turning to those moral and mental aspects of the matter which present the greatest difficulties, let the inquirer begin by mastering more elementary problems. Let him on meeting a fellow-mortal, learn at a glance to distinguish the history of the man and the trade or profession to which he belongs. Puerile as such an exercise may seem, it sharpens the faculties of observation, and teaches one where to look and what to look for. (Holmes; A Study in Scarlet)

“But what I can’t make head or tail of, Mr. Holmes, is how on earth you got yourself mixed up in the matter.”
“Education, Gregson, education. Still seeking knowledge at the old university.” (Holmes; The Red Circle)
Like all other arts, the Science of Deduction and Analysis is one which can only be acquired by long and patient study, nor is life long enough to allow any mortal to attain the highest possible perfection in it. (Holmes; A Study in Scarlet)
Education never ends, Watson. It is a series of lessons with the greatest for the last. (Holmes; The Red Circle)

On learning to reason backwards

Reasoning backwards - working back from observations/effects to causes

The essential factor in this method consists in working back from observations of conditions to the causes which brought them about. It is often a question of deciding the doings of yesterday by the records found to-day. (Thomas McCrae; The Method of Zadig)
The ideal reasoner…would, when he had once been shown a single fact in all its bearings, deduce from it not only all the chain of events which led up to it but also all the results which would follow from it. (Holmes; The Five Orange Pips)
The only point in the case which deserved mention was the curious analytical reasoning from effects to causes, by which I succeeded in unraveling it. (Holmes; The Sign of the Four)
In solving a problem of this sort, the grand thing is to be able to reason backward. That is a very useful accomplishment, and a very easy one, but people do not practice it much. In the everyday affairs of life it is more useful to reason forward, and so the other comes to be neglected. (Holmes; A Study in Scarlet)
Most people, if you describe a train of events to them, will tell you what the result would be. They can put those events together in their minds, and argue from them that something will come to pass. There are few people, however, who, if you told them a result, would be able to evolve from their own inner consciousness what the steps were which led up to that result. This power is what I mean when I talk of reasoning backward, or analytically. (Holmes; A Study in Scarlet)

and the fact that everything old is new again …

There is nothing new under the sun. It has all been done before. (Holmes; A Study in Scarlet)
Mr. Mac, the most practical thing that you ever did in your life would be to shut yourself up for three months and read twelve hours a day at the annals of crime. Everything comes in circles…The old wheel turns, and the same spoke comes up. It’s all been done before, and will be again. (Holmes; The Valley of Fear)

This is ergo more a book recommendation, than a book notes post.
Most everything that I could hope to capture, is already in this slim volume.
And just like Doyle’s books, this one is worth coming back to over and over again.